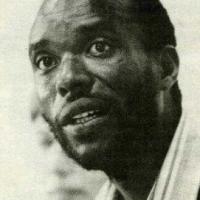 Biographie : "Froduald Harelimana came to OSU from Rwanda in 1992 on a Fulbright Scholarship to study for a doctorate in Education. Having gone back to Rwanda in January 1994 to attend to his ailing wife, Harelimana found himself trapped in a country engulfed in civil war and fled Rwanda with his son. After receiving an appeal from Harelimana for help in getting back to the U.S., Irma Delson, Jodi Engel and others at OSU started a campaign to raise funds for Harelimana and his son's safe transport. Finding ample support in the local community, the campaign was successful and Harelimana and his son, Symphorien, flew to the U.S. in July 1994. After receiving his doctorate, Harelimana eventually settled in Missouri." ( http://oregondigital.org/catalog/oregondigital:df70dc40b - c.2017)
Nationalité : Rwanda