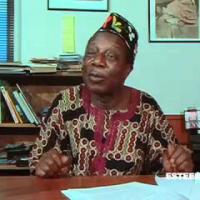 Biographie : Fon Fongum Gorji-Dinka is an educated Christian as well as Traditional Ruler (Fon) of the Widikum Kingdom, an aboriginal kingdom of the erstwhile Southern Cameroons (Ambazonia Republic). Fon Dinka believes in freedom of worship, in freedom of speech, and also in the diligent application of the rule of law by modern governments. Above all else, he believes in the right of self-determinations of all peoples, especially given the experience of his native land, The Republic of Ambazonia (Southern Cameroons) and the illegal occupation and gross human rights abuses by the Republic of Cameroun subsequent administration under the lies of unity via the 1961 UN Plebiscite. Thus to the Fon, no peoples should ever be subjected to the kind of relations his peoples of Ambazonia have had with Cameroun Republic for the last 44 years! -(See more at: http://www.ambazonia.org/index.php?option=com_content&view=article&id=305:biography-and-resume-of-his-royal-highness-fon-fongum-gorji-dinka&catid=106:biography&Itemid=275#sthash.LN6PIQxA.dpuf)
Alias : Fon Fongum Gorji-Dinka
Nationalité : Cameroun